DataCeutics' CEO, Matt Ferdock, is a member of the 28th Division Chaplains’ Reenactment Group whose mission it is to document and keep in memory the contributions of Chaplains of WWII. A young member of the reenactment group, working alongside Matt to ensure we don't forget these important events and contributions, shared some of his thoughts working with the group. 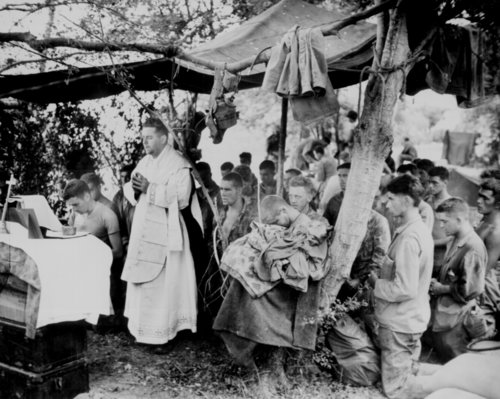 Four years ago, I was introduced to the 28th Division Chaplains’ Reenactment Group at the Mid-Atlantic Air Museum’s WWII weekend and have been in the group ever since. What brought me to the event was my passion for military history, especially WWII. The group really peaked my interest because the 28th Infantry Division played a major role in WWII, fighting in major battles like Hürtgen Forest and the Battle of the Bulge. What I learned that day was the major role Chaplains played in the war, not just religiously, but in the way that they helped morale-wise by providing the soldiers with games and activities to keep their minds busy. The wealth of interesting information provided to me is what really sealed the deal.

By setting up the chaplains’ displays at all the different events we participate in, we are able to teach the public about the chaplains that served during the war. The leader and creator of the group, Colonel Robert Berger, brings a sense of discipline because of his military rank as an Airborne Chaplain in Vietnam. When he is around, you better be on your best behavior and your uniform squared away or you will get reprimanded for it, which is a good thing because we are representing soldiers of the time and should look and act the part. It is not all serious though, there have been many fun times, like touring the Gettysburg Battlefield in an M20 Armored Reconnaissance Vehicle and flying in a Consolidated B-24 Liberator. It is great educating the public about WWII while having a fun time doing so.

My favorite part about being in the group is having the opportunity to listen to the veterans that have served. Over the past few years, I have been grateful to hear many interesting stories from veterans who worked on the atomic bomb, sailors who served on various ships in the Pacific, and even soldiers who fought in the Jungles of Burma. It saddens me to think that we are losing these veterans rather quickly who were part of “The Greatest Generation,” but it motivates me to spend as much time as I can with them. Now is the best time to talk to WWII veterans and hear their stories before that opportunity disappears.

More about WWII can be learned in this short movie clip.

Logan Miller is a young member of the 28th Division Chaplains’ Reenactment Group and Commander of his High School ROTC Unit.

Matt Ferdock is CEO of DataCeutics, a Functional Service Provider of Biostatisticians and highly experienced SAS Programmers. Matt’s affection and enthusiasm for the history of WWII and those who volunteer to keep the stories of the Chaplains and soldiers alive have been influenced by his uncle, Colonel Robert Berger, the Chaplain mentioned earlier in the story.