Many people are spending their free time during the pandemic binge-watching Netflix and playing video games. Then there is Senior Statistical Programmer Analyst Barry Brolley, who is volunteering his time printing artificial hands on his 3-D printer for those in need, building trails at out-of-state nature areas, and promoting regenerative agriculture to help save the planet’s future food supply. He is a fascinating individual who thrives on challenging himself in work, as well as in play…that is, if you want to call climbing the Nose of the notoriously dangerous El Capitan mountain, and sleeping on a 12-foot ledge 2,000 feet off the ground, “play.” 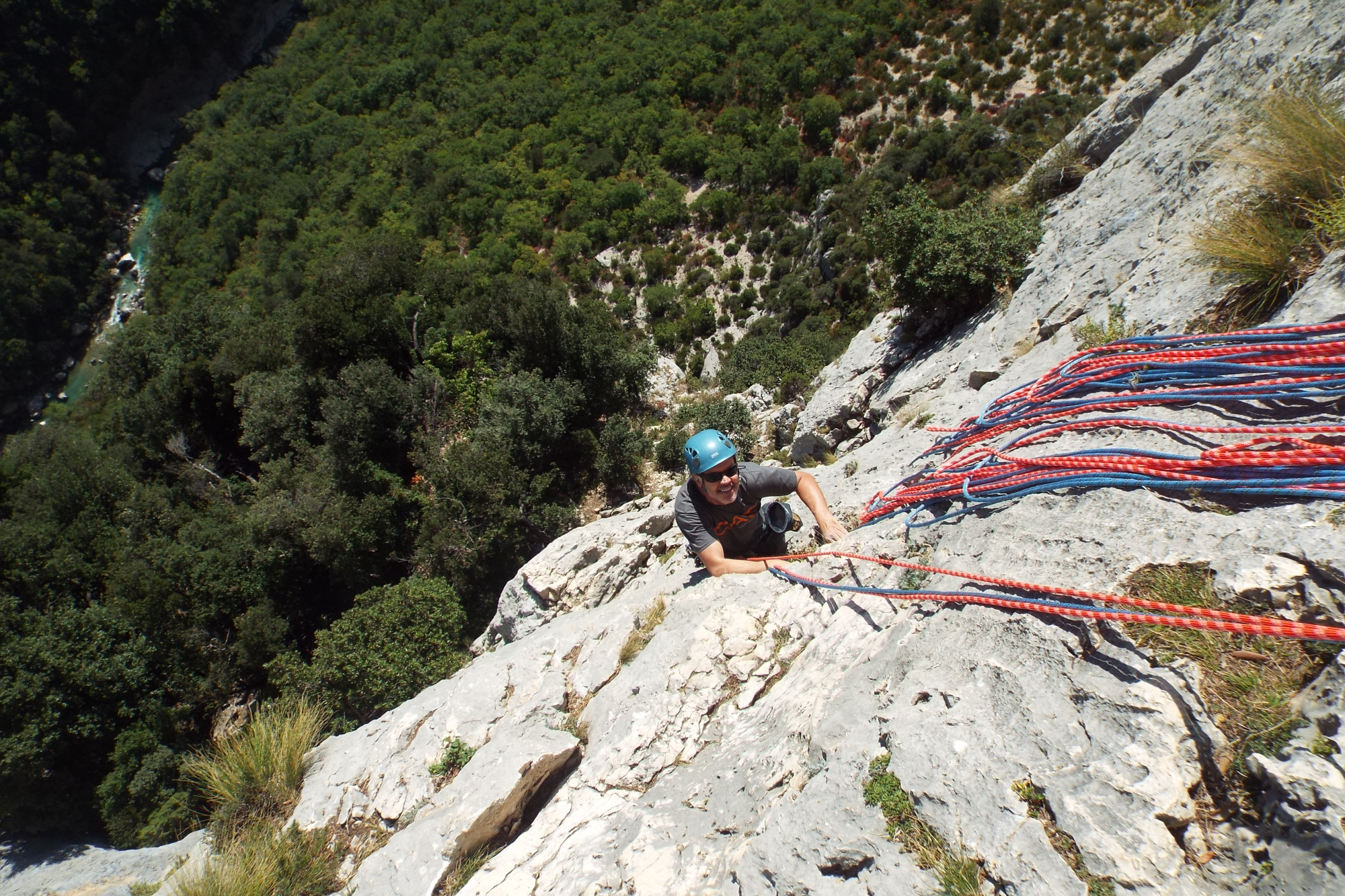 Acutely aware of being born privileged in a world where many people are far less fortunate, Barry is motivated by an intense feeling of gratitude and a strong desire to give back. He has been with DataCeutics/Navitas Data Sciences for 5 years and feels very fortunate to be doing work that is enjoyable, challenging, and contributing to the betterment of others. He is especially grateful for the pleasant, supportive work environment the company provides. “I remember when I got done with the interviewing process, a thought immediately popped into my head: ‘I really want to work here’. I felt so welcomed,” Barry recalls. “I'm very appreciative of my coworkers - everyone here, without exception, is so helpful and so gracious with their time. There are so many smart people here, that I love when they show me something that I did not know,” he adds.

When asked what work project has truly challenged him, Barry answered: “For the past year, I've been working on something called the Pool ADA NAb analyses. The pool is referring to 11 different studies, with different indications, so I have to keep those straight. In the Subject Level VAD, there are over 9,000 subjects with over 1,500 variables, so more than 10 million data points. The ADA refers to the anti-drug antibodies, and the NAb, refers to the neutralizing antibodies (antibodies anyone?) so there’s a bit of biology thrown in. When I first started, we were in the BCE environment, then switched over to entimICE - some of the studies are legacy, and hence stream 1, while others are stream 2. The QC process has been extended by first introducing enableSAS, and more recently enableR, with its SHINY apps. So, I am constantly being challenged in a positive way with all these new learnings.”

Armed with a Bachelor’s degree in Mathematics and a Master’s degree in Statistics, Barry began his career in 2000 on the preclinical side at Merck & Company, moved on to Pfizer, Inc., then took advantage of the opportunity to work on the clinical side at Eli Lilly. After 10 years there, he accepted a Senior Statistical Programmer position at inVentive Health Clinical, then joined DataCeutics/Navitas Data Sciences four years later, in 2014. 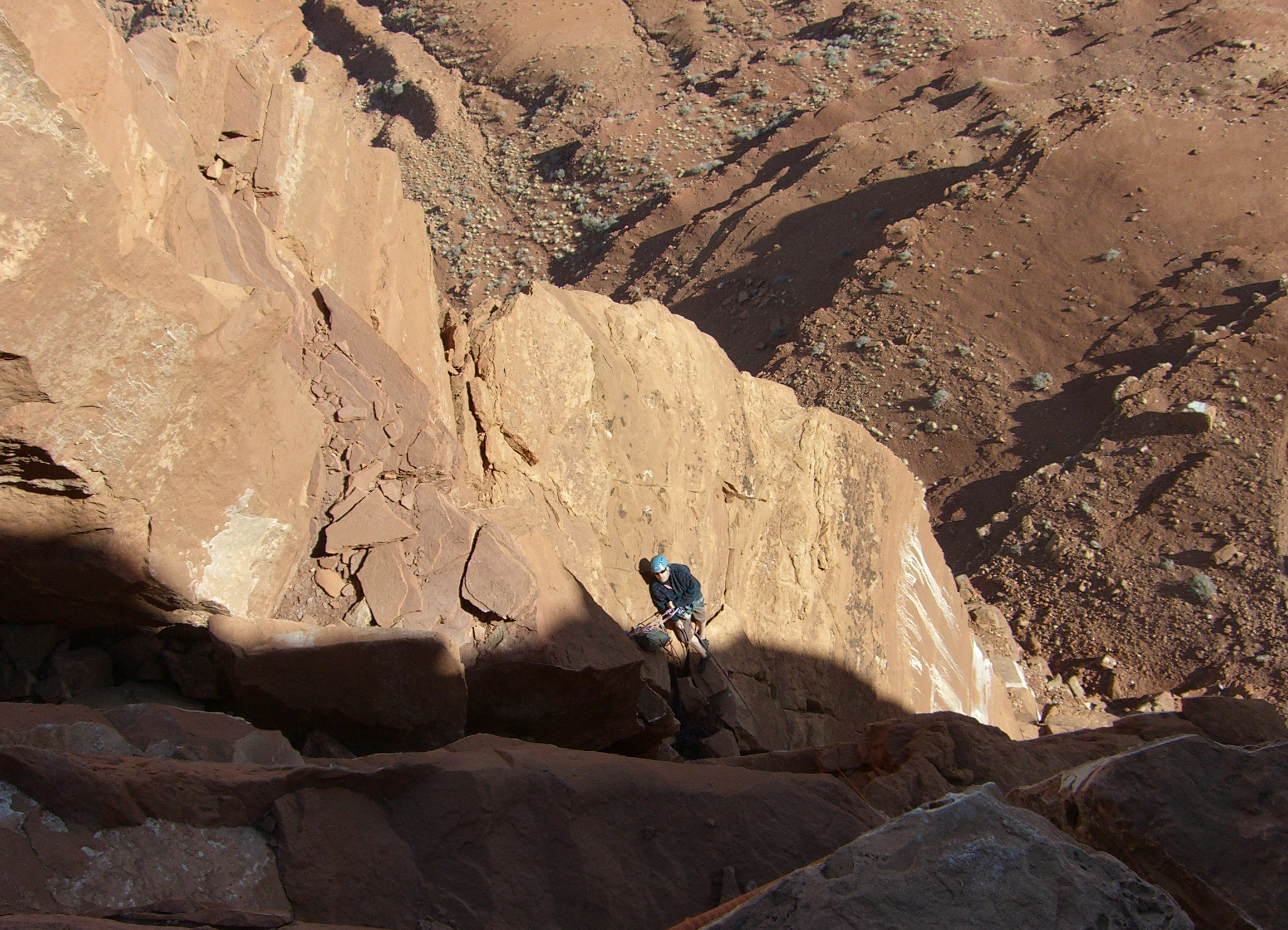 Barry has many hobbies and countless interests (he speaks fluent Spanish and can read Japanese), but perhaps his greatest passion is rock climbing. He thrives on the challenges and the comradery climbing provides, and it has taken him to numerous exotic locations. He has climbed in Thailand, Mexico, South America, France, Spain, Italy, Morocco, Greece, and England. He has endless stories of exciting adventures and close-calls. Recently, on a climb in Yosemite National Park, he had to scurry down from a high ledge to rescue his haul bag (the backpack climbers use) from a hungry bear. A few years ago, Barry did what the running world calls “the Rim-to-Rim,” in which he and two friends ran across the Grand Canyon. “We started on the north rim early in the morning in the dark with snow on the ground,’” he recalls. “The last 10 miles were uphill (5,000 feet elevation gain) on the south rim and in the hot sun. I'm partially convinced that I expired then and there, and my soul is still hovering around the canyon,” he says with a laugh.

A recent trip to Bolivia offered several terrifying moments. “One was on a bicycling diversion. I saw a sign that read ‘Ride the most dangerous road in the world’ outside a little bike shop,” Barry recounts. “My partner and I thought it was hyperbole and we were expecting a restful day, but the road very well may be the most dangerous in the world, and we almost died on it,” he remembers. “I was thankful when I got back to Indiana,” he adds.

Barry lives in Indianapolis, Indiana in an old former schoolhouse that he renovated, with his girlfriend, Becca, two dogs (Paco and Maggie), two cats (Yuki and Lotus), and Becca’s two horses (Mayday and Negueva). He’s also recently purchased land in a remote part of Kentucky, along with three shipping containers after being inspired by unique ‘container homes’ he saw on a trip to the south of Spain. “It took a few years until things lined up and I decided to give it a go,” Barry says. “There have been a LOT of steep learning curves, such as learning to weld and to use a cutting torch. Those, along with my limited knowledge of wiring and plumbing, should keep me busy and entertained for a while,” he adds with a grin.

His “bucket list” could fill several lifetimes, but as Barry crosses off accomplishments, he adds more. He volunteers for a group called Indy Adaptive Climbers. “We take people with various disabilities climbing, initially indoors, but sometimes outdoors. For many of them, this is their only outlet for physical activity. It is tremendously rewarding for me to see the joy on their faces,” he says. He also loves taking videos of his adventures on his GoPro, often using a drone. Recently, Barry has been experimenting with a 3-D camera so he can upload his videos into Virtual Reality goggles. 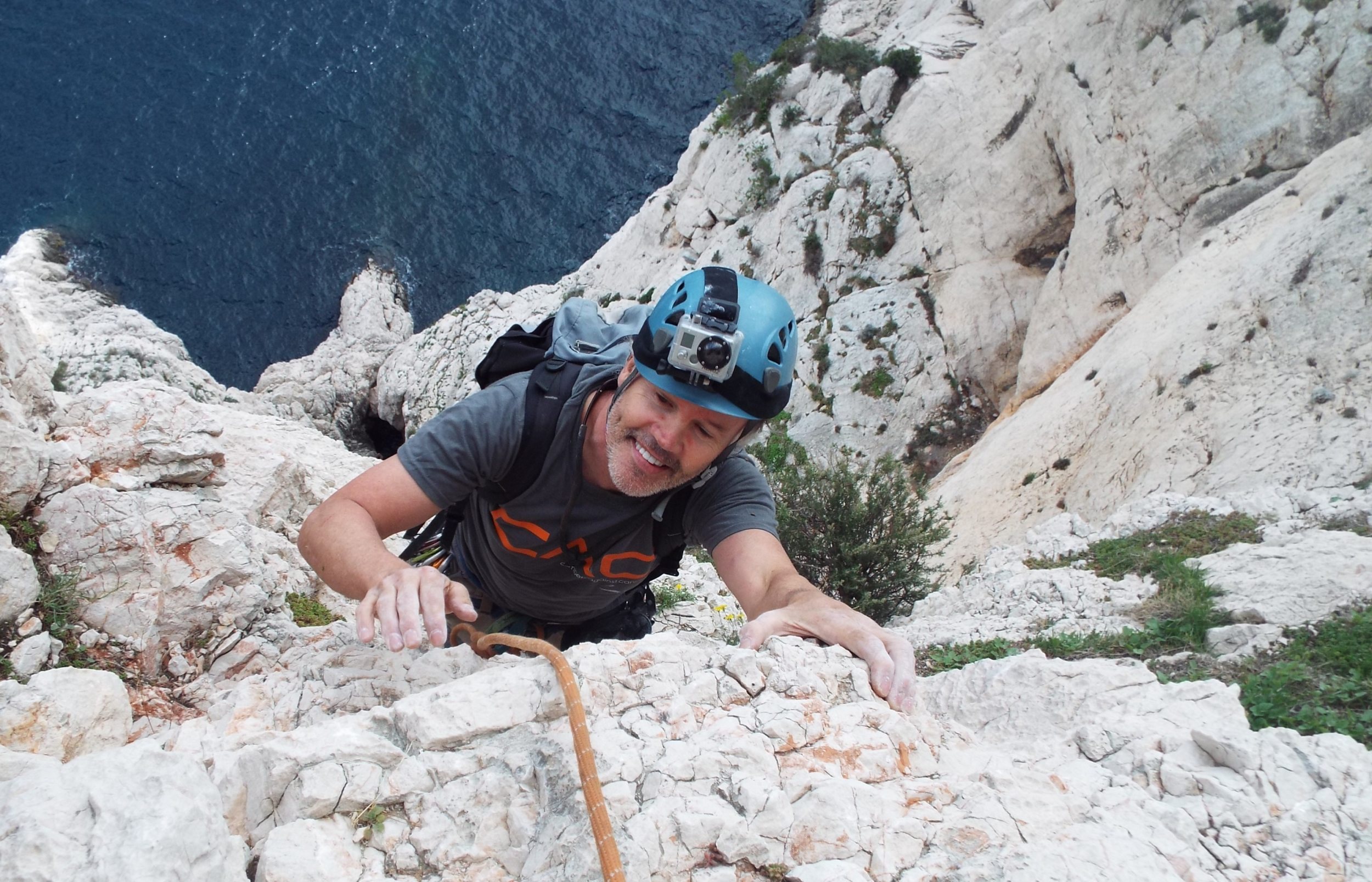 An interesting article in the New Yorker magazine, The Rogue Experimenters, introduced Barry to e-NABLE, a collaborative group of thirty thousand international volunteers who design and make prosthetic hands and arms on their 3-D printers for people who need them, at no cost. Barry was so fascinated and challenged that he procured the blueprints and gave it a go. After gaining e-NABLE’s approval by submitting a video of his process, he is ready to fill his first order. A young girl who sadly lost her hands in a house fire has requested he build her one pink hand and one purple hand, which makes the project that much more satisfying.

An eye-opening visit to Polyface Farms in Virginia launched Barry’s interest in regenerative agriculture. The farm’s mission is: “To develop environmentally, economically, and emotionally enhancing agricultural prototypes and facilitate their duplication throughout the world.” Barry was so moved by what he learned about farming that treats animals humanely, operates without the use of pesticides, fertilizers, or harmful chemicals, and utilizes carbon sinks (natural environments that have the ability to absorb carbon dioxide from the atmosphere), that he signed-up to promote them. He also donates to the Sacred Cow project, a timely documentary about the science and ethics of a sustainable food system and the important role that meat plays in it, and is helping to promote the upcoming movie.

There is a common theme in all of Barry’s many interests, including his work as a Senior Statistical Programmer Analyst. Repeatedly, in all of his endeavors, he is faced with challenging situations that in his own words “initially feel insuperable, but then after thinking them through and working hard, the answers reveal themselves.” In his job, as well as his hobbies, an ability to focus intensely is a requirement for success and survival. “I think that climbing and my other outdoor pursuits, as well as my work at DataCeutics/Navitas Data Sciences, complement each other perfectly,” Barry says. Together, they offer Barry Brolley a very full and fulfilling life. 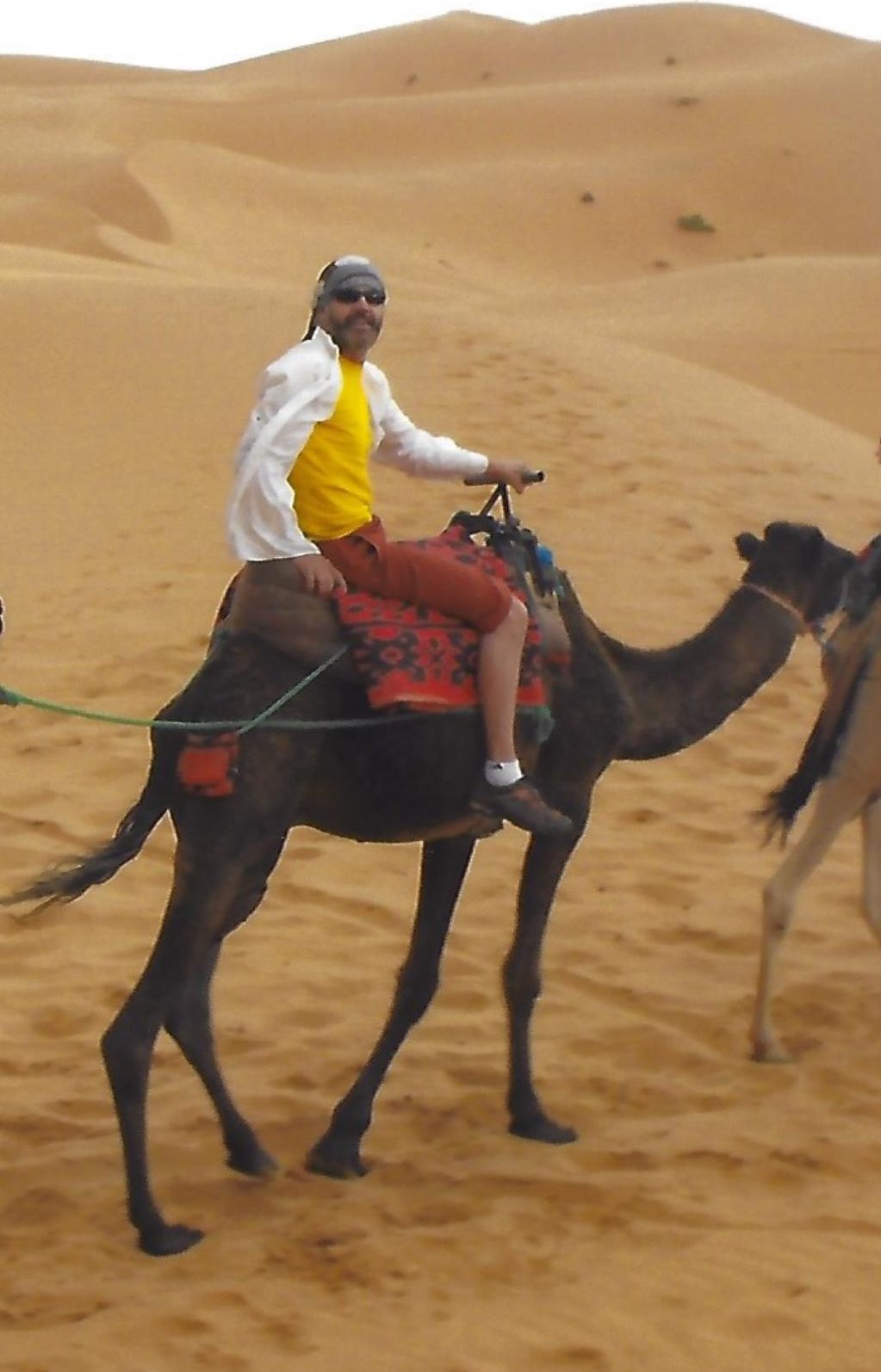