Just after the holidays, we took a survey with 100 of our SAS programmers. Our goal was to get a better understanding of how programmers think. We asked 8 questions ranging from “What’s your favorite activity during the holidays” to “What are you looking forward to in 2017.” We found some curious results. Around the holidays spending time with the family is the resounding favorite answer from most of the programmers polled. A few others were to relax and eat delicious food. 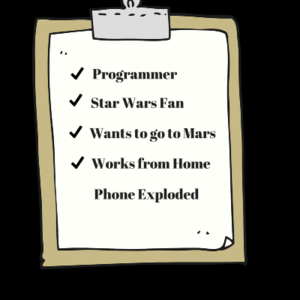 2016 was an interesting year, to put it mildly. We had cell phones exploding, the election season, virtual reality and self-driving cars, which are just a few of the highlights. Seeing how programmers have a unique perspective, we thought it would be cool to see how they weighed in on some of the highlights. Of the programmers that responded to the survey, an overwhelming number disliked the election season and are glad to get all the debates, rallies, and constant news coverage behind them. However, looking at recent post-election activities, it looks like nothing is slowing down in this regard!

It’s kind of funny when one of the best things that happened in 2016 was something bad did not happen. By this, of course, I mean not having your cell phone explode. Some of the other favorites were Rogue One, a fantastic film and the self-driving car, which is now a thing.

2017 has a bright future, and a great way to start off is with a New Year’s Resolution that most of us won’t be able to keep. This survey question gave the most varied response in the survey. The top two were to Take More Vacations and to Hit the Gym and Lose Weight, which are generally the most common. There were some other great answers as well, such as Spend More Time with Family, to Use Time More Wisely, and the one that gave us a chuckle was to Stop Taking Surveys.

Programmers are looking forward to 2017 with special note, that it brings them one year closer to Mars and it brings with it a lot of new technology. We have many advances in technology coming out this year such as driver-less cars, the Tesla Model 3, virtual reality and the Nintendo Switch. Aside from landing on Mars, it seems 2017 has a little something for everyone to look forward to ahead.

Since most of DataCeutics’ employees work remotely, we asked how people liked or disliked working from home. The largest response was people loved working from home. It comes with great benefits such as not needing to worry about the commute, looking at the weather report, combing your hair, or needing to pack a lunch. Some things didn’t come as a surprise such as programmers love to nerd out when it comes to new technology and new Star Wars movies. All in all, this was just a fun activity to let us understand just a bit more about our SAS Programmers.