Andee Garrison, Lead SPA I, Loves Her Work and the Industry

Andee Garrison was hired as Senior Consultant, Clinical SAS Programmer Analyst at DataCeutics in 2015, initially working as a member of the Quality Control (QC) Team, working across a variety of studies. To her delight, as her career progressed with the company, she moved into a SPA role that allowed her more in-depth participation, such as performing back-up lead activities and sole-ownership tasks, including ad hoc deliveries and data imports and refreshes. 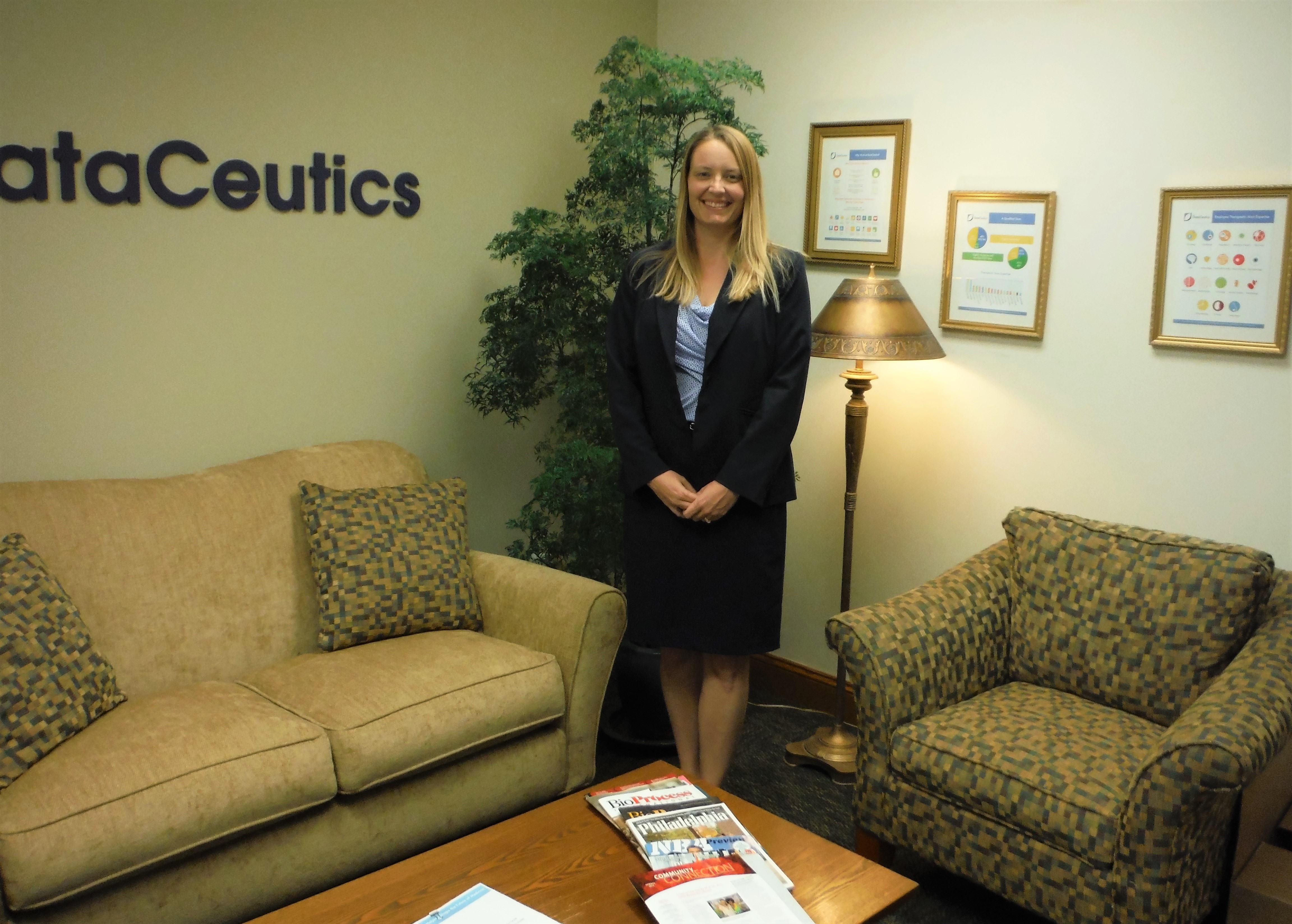 Andee Garrison at the DataCeutics office in 2015.

This year, she was promoted to Lead SPA I, a supervisory position that is as enjoyable for her as it is challenging. “It’s been a great growth experience and it provides a fantastic opportunity for me to interact with co-workers daily, which I enjoy,” Garrison says. As luck would have it, several years ago, when entimICE (a system containing a Standards Metadata Repository (SDMR)) was introduced, Garrison was working on a study that was to be one of the first to migrate onto the new platform, and as she became the company’s ‘entimICE superuser,’ she also became the go-to person for questions about its use and functionality. “I enjoy this role because it benefits me as I get to learn about the intricacies of entimICE while helping others,” she says.

It is clear that Garrison excels at her current job by the numerous accolades she receives regularly by the client she is assigned to support, but the path to her success was not an easy one. Her first major was engineering, but as she moved along through her courses, she found that she wasn’t enjoying them and grew increasingly unmotivated. “I realized that if I wanted to earn a degree, I needed to take classes that I liked and wanted to attend,” she remembers. “I decided to change my major because I always loved mathematics growing up and remember taking geometry in high school and saying, ‘if there was a way that I could make a living by writing proofs, I’d do it,’ and as it turns out, programming is very much like writing a proof for me,” she says with a laugh.

In all, Garrison attended 6 different colleges and universities during her 12-year journey to earn her degree, but she eventually received a B.S. degree in Mathematics from North Carolina State University, and now laughs at the various challenges she had to overcome to get where she is now. Her first job was as a Programmer Analyst, Phase I, at PPD, Inc. who recruited her during her final semester, followed by a Statistical Programming job in Neuroscience at Pharmanet-i3, then Senior Statistical Programmer, contracted to Amgen by Chiltern International. “Since that first job out of college, I’ve loved the work and the industry, and it led me down the path to Navitas Data Sciences,” Garrison says with a smile. (DataCeutics is now rebranded Navitas Data Sciences).

Interestingly, Garrison was born in northeastern Tennessee, where her family was named one of the “First Families of Tennessee,” because her ancestors settled there before it even gained statehood! She grew up in Salisbury, North Carolina, a small town north of Charlotte, but moved around a lot as a child due to her mother’s job with the VA Hospital network. She now lives near Orlando, Florida, with her husband of 18 years, Sean, and their rescue animals. Their white German Shepherd, Greta, is a rescue from a puppy mill and their tabby cat, Almatina was from a feral litter. “When we first brought our cat home, the rescue agency said that we had rescued Alma but when we received her paperwork a week or so later it said we had Valentina. She didn’t really answer to either name, so we decided to call her Almatina,” Garrison shares.

Since the COVID-19 pandemic, Garrison’s personal life has had to adjust to a few changes. An avid physical fitness enthusiast, she is usually running 5K races this time of the year or starting up training for half marathons, but there are no races this year. She still works out for about an hour 5-6 days a week, alternating running on local trails with strength training, and staying positive. During Florida’s shut down and rising COVID-19 cases, she’s also not able to use her annual pass to Disney World and misses visits with family and friends to EPCOT and Disney’s Animal Kingdom. 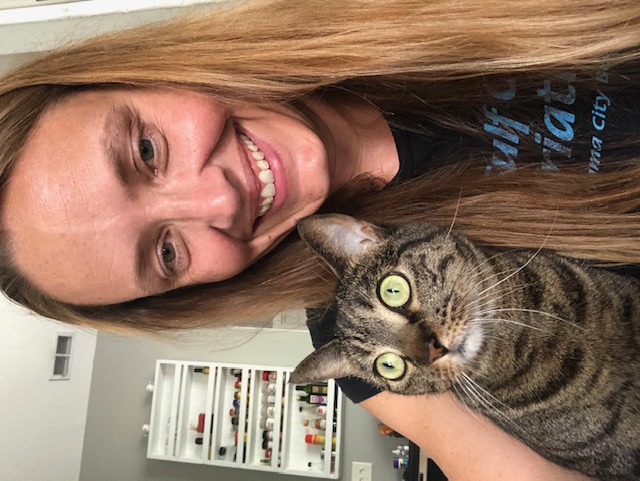 Andee with her tabby cat, Almatina. 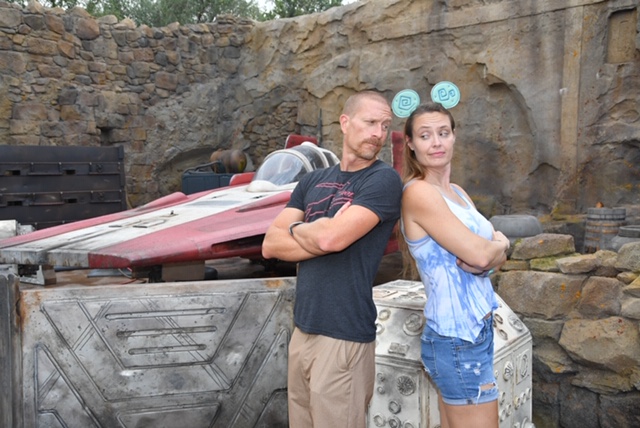 Andee and her husband Sean having a bit of attitude and fun at Disney’s Hollywood Studios at the Star Wars-themed Galaxy’s Edge.

“For me, the magic of Disney is in the atmosphere–the design, the sights, the smells, and the people. There are few things I enjoy more than strolling around a park with my husband. One of my favorite attractions is the Expedition Everest roller coaster, where there are two great drops, and one is backward, and the Yeti animatronics is cool. I actually got to ride the coaster with a friend while we were running the Disney marathon,” Garrison reminisces. 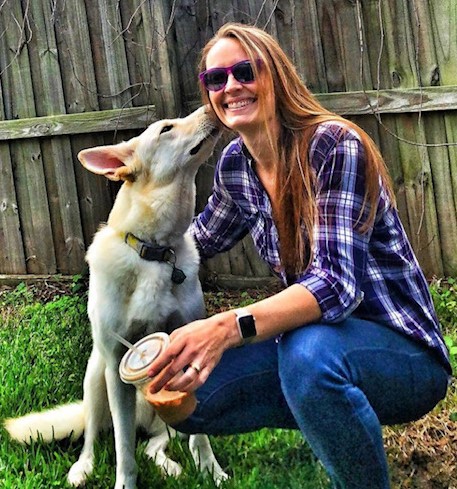 Andee getting a kiss from her white German Shepard, Greta.

Interestingly, this playful spirit who loves to run with her rescue dog and play in Disney World on weekends is such a focused leader facilitating data from very serious clinical trials Monday through Friday. The people she works with highly respect her and are very fond of her. When asked what qualities she possesses that contribute to her success, Garrison answers: “I have been fortunate to work with great teams and leads, who support each other. My favorite quality of my work is problem-solving, which is why I like QC so much. Digging into issues and determining their causes is what I enjoy most about programming. Additionally, I’m always happy to jump in where needed, pitching in on multiple tasks to ensure delivery timelines are met.”

Her pleasant nature and flexibility lend well to helping others in a pinch when they need an extra set of hands or eyes on something, and her positive attitude helps push her through tough challenges when deadlines must be met. “I live by the motto: Happiness is not having what you want but wanting what you have,” Garrison says. Indeed, this attitude serves her well, as happiness seems to follow Andee Garrison wherever she happens to hang her hat…or Mouseketeer ears. 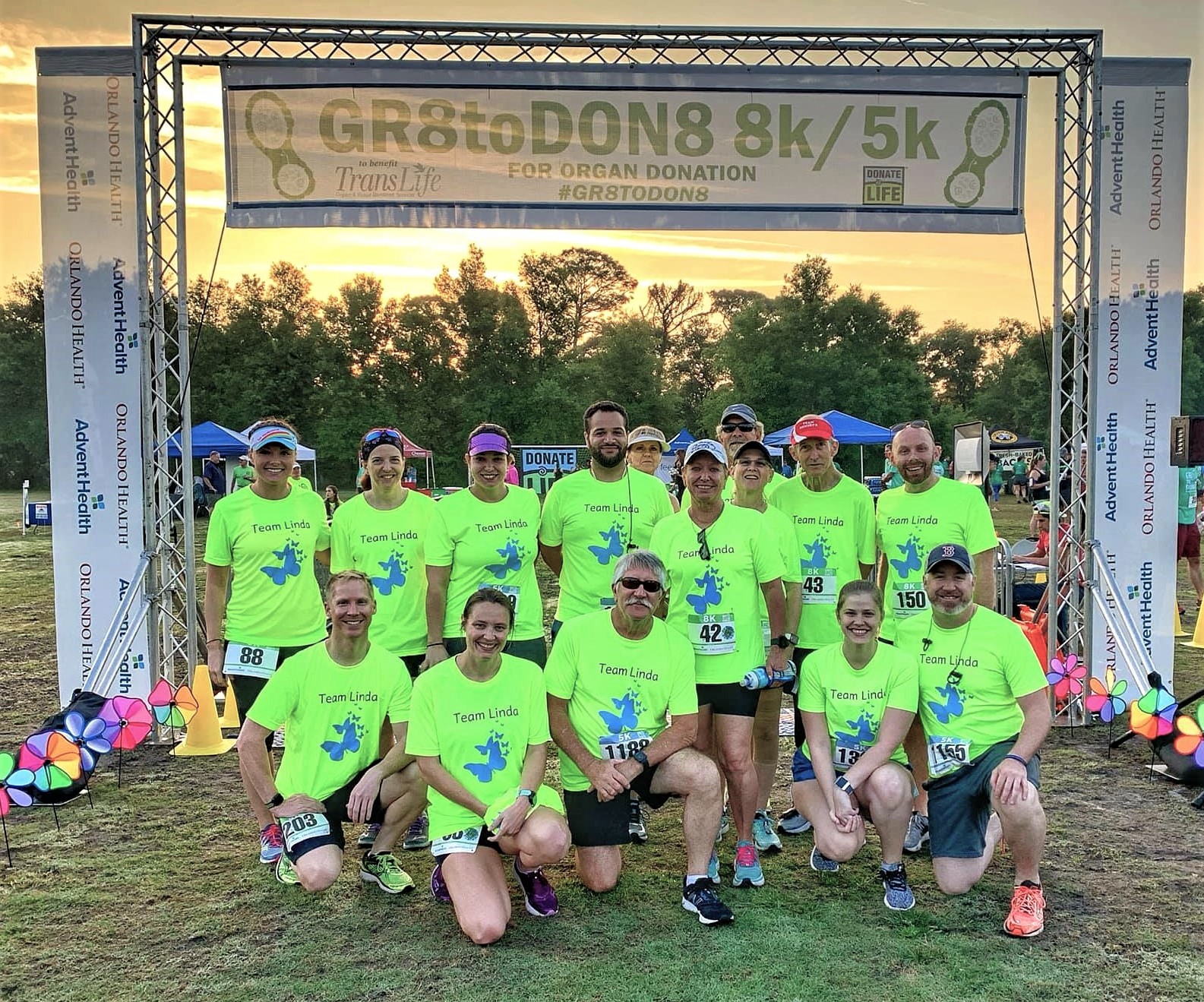 Andee (2nd from left in front row) with friends and fellow racers at Gr8 to Don8 8k/5k race, which raises money for organ donations. NDS donated to the cause on Andee’s behalf in memory of a friend’s daughter who passed away and became an organ donor.