David A. Lombardi, PhD, Lives His Full Life by the Hour, Not by the Day

Navitas Data Sciences’ Senior Biostatistician David A. Lombardi, PhD has been intrigued with discovery ever since watching the first moon landing as a young boy. Every Christmas and birthday, young Lombardi always asked for some sort of science toy, like a chemistry set, a microscope, or an electrical circuitry set.

Dr. Lombardi began his career in 1987, when he graduated from the University of Massachusetts at Amherst, with a Master’s Degree in Biostatistics. “I became interested in the application of mathematics (mainly statistics) in helping to understand and provide solutions to social and public health problems as an undergraduate and was fortunate to have been initially mentored as a young Master's student in Biostatistics by Dr. David Hosmer (of the logistic regression fame),” Lombardi recounts.

After graduation, Lombardi joined a well-established consulting firm in Wellesley, MA, named Consulting Statisticians Inc. (CSI), where the focus of work was primarily in pharmaceutical research, but they also had experts in the use of statistics in litigation and political science (polling).

During his second year at CSI in 1988, the company was acquired by a small Cambridge company named Parexel. “We both only had about 50 employees at the time,” recalls Lombardi. This was also the time when the early biotechnology revolution was booming on both coasts of the US, and some of his early projects were with small and innovative companies, like Amgen, who had only been established less than 10 years earlier, at the time. “I remember working with key efficacy data on floppy disks for their blockbuster drug EPOGEN,” remembers Lombardi, “it was an incredible time.”

After seven years at the Biostatistics and Data Management Division of PAREXEL International Corporation, he transferred to Hybridon, Inc. working on an early antisense therapeutic that was targeting HIV, then worked at Abt Associates Clinical Group as a Senior Biostatistician and Consultant until 1998, when he decided to continue in a PhD program in the School of Public Health, Department of Biostatistics & Epidemiology at the University of Massachusetts at Amherst.

In 2001, he joined the Liberty Mutual Research Institute, where he provided leadership in Biostatistics and Epidemiology for projects related to safety and by 2010, steady promotions furthered him to the position of Principal Research Scientist. During these years of collaborative research in health and safety, he impressively authored and co-authored over 75 peer-reviewed publications and presented at over 50 national and international conferences. Also, during that time and for the next 18 years, he served as course director and primary instructor at the Harvard School of Public Health for an innovative course that focused on the use of epidemiological methods to study the etiology of injuries and their prevention.

It was after the institute closed in 2017, that Lombardi joined DataCeutics, now Navitas Data Sciences, anticipating new challenges and relishing the opportunity to work from his home office. “It is an incredible productivity boost,” declares Lombardi. “It eliminates a commute time of 2-hours per day. I wake up and get right to it,” he adds with glee.

“I really enjoy working for Navitas Data Sciences,” Lombardi says. “I am most pleased that my colleagues at Navitas are so well-experienced, and the core team, who are mostly long-term employees, are so dedicated.  They provide me and the other remote team members with such excellent support, from client relations, benefits and time management, to computer and software support,” he continues. “I love that I can spend almost all my time doing what I think I do best, serving the client as a Senior Biostatistician,” he adds.

Lombardi finds his current project assignment incredibly challenging and rewarding. His day-to-day responsibilities are to provide high-level Biostatistical support to a client whose mission is to transform the treatment of serious diseases through the discovery and development of organ-selective medicines. “I am able to employ many of the new and advanced statistical study designs and analysis methods to this project, and it makes each day a learning opportunity, in addition to providing the client with designs that advance their clinical development,” Lombardi says.

Clearly, he loves his job and his position. Although the idea of becoming an astronaut eventually faded, his dream of becoming a successful and accomplished scientist was realized tenfold. 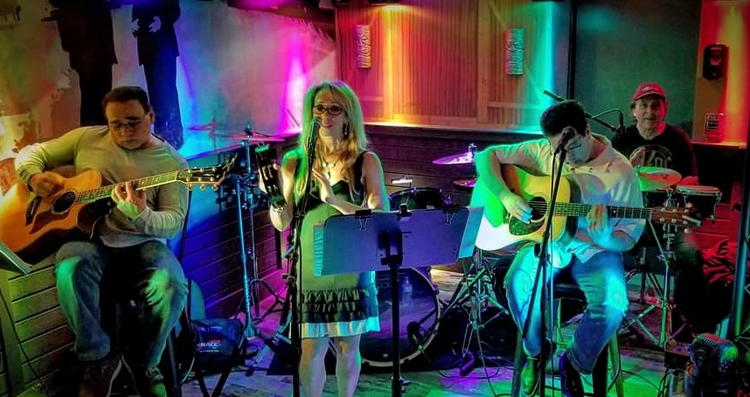 Senior Statistician Dave Lombardi on the left performing with his band, Take Two.

Genuinely a good person, Lombardi is blessed with a good sense of humor and an infectiously positive attitude. Lombardi is a church-goer and a dog-lover who lives by the Frank Zane motto: “Live your life by the hour, not by the day…What will you achieve in the next hour?” The answer for Dave Lombardi is most likely, “a lot.”