With the pandemic still raging as the world holds out for hope, all eyes are on the myriad of COVID-19 clinical trials that are currently testing vaccines and treatments and presenting invaluable data. DataCeutics/Navitas Data Sciences is proud of our many programmers, analysts, and managers who are among those contributing to this global effort. One name that stands out among them is Project Manager II, Beth Reinbolt.

Beth has been working at DataCeutics/Navitas Data Sciences for ten of the twenty-one years she has been in the Pharmaceutical and Contract Research Organization (CRO) Industries. Her name stands out because she has received a lion’s share of kudos and thank you letters from the clients that she has done work for, and it is universally agreed upon that she has an excellent attitude, is flexible, efficient, and an absolute pleasure to work with.

Recently, a client wrote: “Beth always beats me with her proactiveness. She goes out of her way to absorb additional steps, processes which can improve the quality of the data and deliverables. She is extremely hands-on and offers thorough reviews of programs and outputs. I could not locate any critical issues with the deliverable under her leadership. The list goes on. I am extremely fortunate and glad to have worked with her and look forward to working with her in future deliverables.”

At the root of the accolades, is a sincere desire to make a difference, and to help humanity. When asked which project has been the most challenging in her career, Beth points to her most recent work: “The current project for COVID-19 is challenging, as we learn more about the virus and deal with the spikes and hospitalizations. I love being part of the effort to save those who are severely ill.” 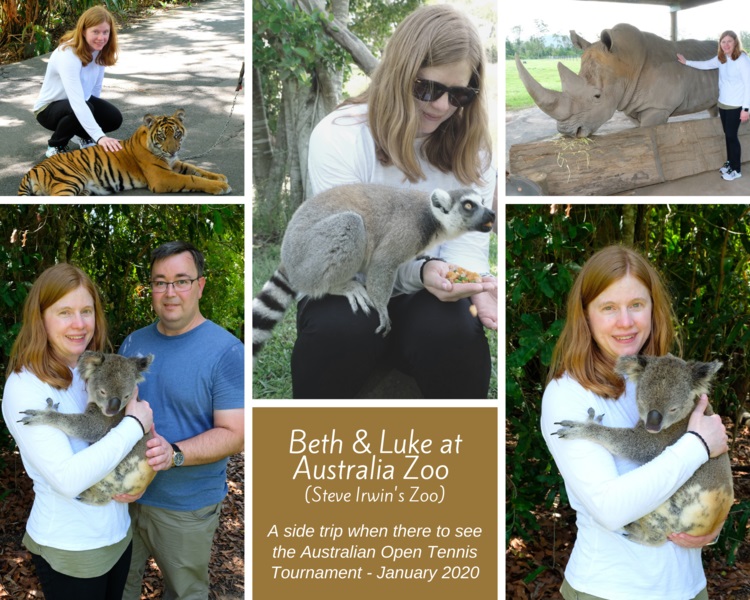 Raised in a small farming town in Nebraska, spending summers hacking weeds from neighbors’ fields and detasseling corn, Beth had an idyllic and supportive childhood. A bright child who loved learning, she was fortunate to have a family that was happy to quench her thirst for knowledge at a very early age. The youngest of four children, her considerably older siblings spent a lot of time with her, teaching her the three Rs and basic science, giving her a strong head start before she entered public school. (Fun fact: Her sports fan father taught her to recite every quarterback in the NFL at age three.)

Beth was fortunate to be mentored by great teachers who recognized her enthusiasm and abilities and encouraged her academically at each stage of her education. Mathematics came very easily to her and she was an avid reader, already enthralled by science as a sixth-grader. Interestingly, Beth believes that mathematics and music support each other, and attributes much of her success to the many music teachers and choir directors who influenced her growth.

Immensely grateful to the long list of astute educators who guided her, Beth remembers each one with affection, in vivid detail. “I had a wonderful biology teacher in high school who submitted me for an accelerated science program, and I was sent to Fermi National Laboratory where one of the particle accelerators resides,” Beth reminisces. “I spent a great summer learning about subatomic particles and decided that I would major in physics in college,” she continues.

A Professor Sylwester at Concordia University in Seward, Nebraska, where Beth earned B.A. degrees in both Mathematics and Physics, was a major influencer. “He was the one who helped me the most in my current job application,” says Beth. “He taught physics from the standpoint of “work backward.” We usually knew the endpoint, or answer to a question, so it was much easier to work backward from the answer to get to the beginning, and it is how I code to this day,” Beth says. “I know the type of output needed, whether table or listing or figure, and I program backward from that endpoint to get me to the start,” she reports.

She met her husband, Luke Reinbolt while sharing some of the same classes at Concordia University, and after carrying a very heavy load so that she could graduate in three years with two degrees, Beth received her M.S. degree in Biometry from the University of Nebraska in Lincoln. Beth and Luke have been married for twenty-three years, and reside in Lincoln, Nebraska. (Luke is currently a Lead Programmer at DataCeutics/ Navitas Data Sciences.)

Her home is a joyful one with five rescue fur-babies that provide a constant source of entertainment. “I am a crazy cat lady but seriously did not start as one. We have Nella, Taylor, Leonard, Sheldon, and Nikoletta,” laughs Beth. “We were naming the cats after scientists (yes, The Big Bang Theory counts), but then adopted Nella and Taylor when they were nine, and decided not to give them new names at that age,” she says. “Sheldon loves to follow Nella and she hates it. It makes me think about the old cartoon, Pepe Le Pew,” Beth says with a giggle. 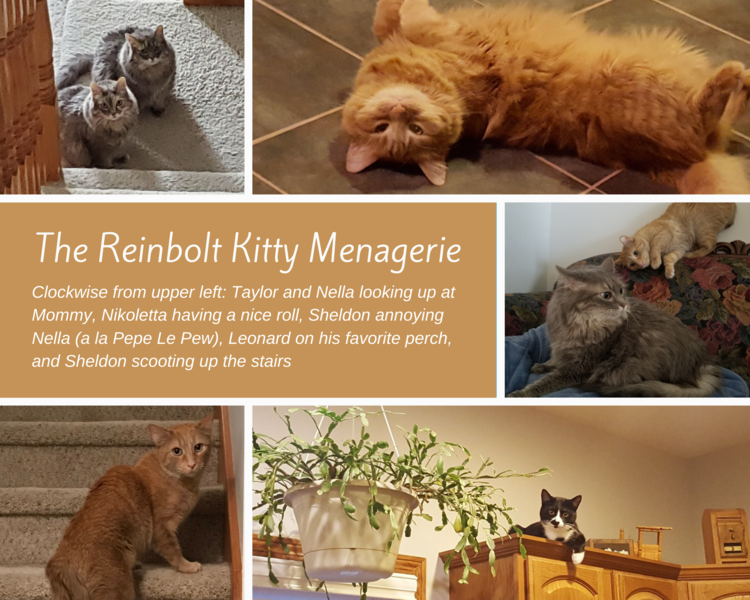 When asked what she considers to be the strongest traits that have contributed to her success in her profession, Beth responded: “I don’t give up and have the tenacity to finish any task I’m given. It got me through Electricity and Magnetism, and Modern Physics, and it gets me through programming tasks today. I work hard and don’t mind the hours when they are needed. It is all a part of the job, as there are ebbs and flows with the work in this industry. Finally, I try, though I don’t always succeed, not to sweat the small stuff. It’s easier to smile my way through the day than to get angry and hold on to grudges or irritation.”

Not surprisingly, Beth welcomed her promotion to Project Manager II, and enjoys her role, because she says, “I like being in charge and being able to move all the pieces where they need to be. My Myers-Briggs Type Indicator personality matches are Margaret Thatcher and Napoleon,” she adds with a laugh.

Earlier in her career, Beth joined coworkers in various activities to blow off steam, placing bets on who would finish a five-kilometer race first, and daring each other to master yoga and Jazzercize. The final dare was kickboxing, and Beth loved it from the start. Punching and kicking bags helped relieve the stresses and frustrations of her work overload at the time, and seven years ago, she became an instructor.

The kickboxing introduced her to Krav Maga, a form of exercise, physical training, and self-defense techniques, (originally developed for the gender-inclusive Israel Defense Forces after WWII) derived from aikido, boxing, wrestling, judo, and karate. The unarmed combat movements are based on the use of reflexive responses to threatening situations and helped Beth feel more confident walking to and from her car in somewhat unsafe locations. She loves it and has earned her Black Belt in the sport. 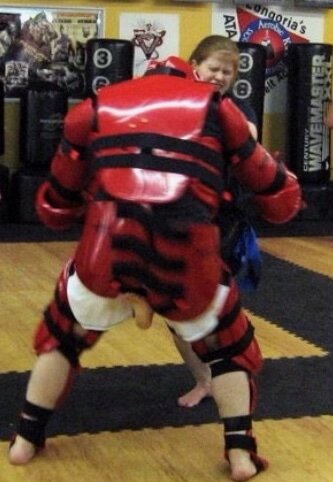 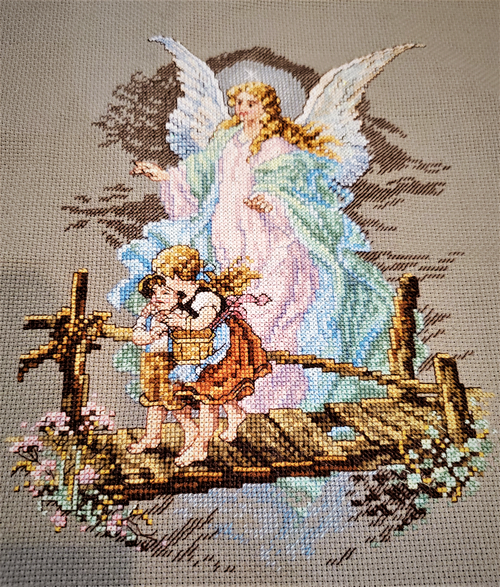 One of Beth’s latest needlepoint masterpieces

Today, Beth manages teams of SAS programmers, assigning tasks, troubleshooting, and carries the responsibility for deliverables being on time. Her vast experience spans several therapeutic areas and multiple clinical trial phases. While she enjoys being in charge, she works extremely well within a study team framework, where she excels at supporting and mentoring statisticians and data managers and enjoys collaborating with colleagues. She is a hard-working leader with impressive natural ability, and strong dedication to the project at hand while exhibiting flexibility and a pleasant demeanor. Precisely the kind of person we need on the frontlines right now, supporting the global fight against a menacing, relentless pandemic. Kudos to you, Beth Reinbolt, and thank you for all you do!