We close 2020 out with a salute to Senior Statistical Programmer Analyst I, Ed Stamm. He has worked for DataCeutics/Navitas Data Sciences for twenty-one of his twenty-eight years in the industry. Ed enjoys having the opportunity to work on submissions for drugs that can give people a new lease on life and loves working in a supportive environment the company provides. “Everyone is so giving of their time and expertise, and it is clear that everyone wants our company to succeed and our clients to accomplish their goals,” Ed says. “The administrative support staff is incredible, and they are always there to help and to supply immense kindness at needed times”, he adds.

Interestingly, Ed’s background was initially in Psychology. After receiving his bachelor’s degree in Psychology from the State University of New York in Binghamton, Ed became an instructor at the University of Kentucky in Lexington, where he taught for seven years, and even received an award for his teaching performance. While in pursuit of his master’s degree in Experimental Psychology at the university, he studied statistics, data, and SAS programming, which led to a job as a Database Controller at Statistical Consultants Inc. (later renamed ClinTrials Research Inc.).

Having honed his management skills, Ed moved into Clinical Data Management at ClinTrials Research, Inc. serving as a lead/manager of the Data Management staff, coordinating project teams and functioning as the primary client contact. It is here where Ed gained knowledge in over a dozen different therapeutic areas, eventually making him an extremely attractive addition to the DataCeutics/Navitas Data Sciences team.

When asked to name a truly challenging and positive work project, Ed answered: “I would have to go back to a time when DataCeutics selected a few programmers to work on a 'challenge' project, where the client wanted to assess and compare DataCeutics’ skills with the skills of programmers at other companies. As one of the programmers selected, I was assigned a subgroup of analysis datasets to QC, where some 'problems' with the data were contrived. I certainly found my share of problems, and I believe that I even found issues that were not expected.” It is partially to Ed’s credit that DataCeutics/Navitas Data Sciences not only won the contract but still does a lot of work, many years later, for that same client.

Ed still lives in Lexington, Kentucky, with his wife Jeri, who he met on Groundhog Day in 1991 and married on D-day a year later. He considers his daughter, Anna, his proudest personal accomplishment. “Nothing I could do would be more important than the force I've unleashed on this unsuspecting world,” says the proud papa, with a smile. “She’s smarter than I could possibly imagine myself to be and is currently in grad school at Indiana University in media studies, and continues to amaze both her parents and her professors with her intelligence and abilities,” he adds. 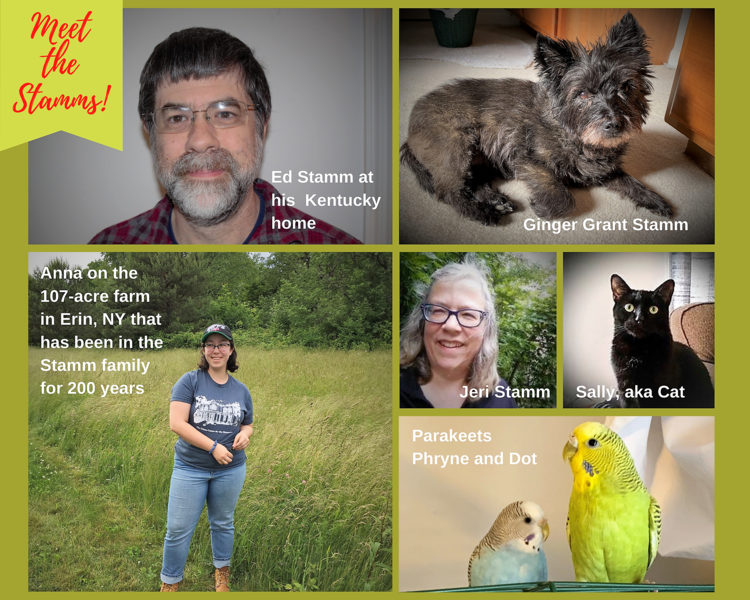 Fortunately, due to her school’s excellent COVID-19 testing program, Anna has been able to visit with her parents every month, but the empty nesters are never alone. In addition to Sally, a beautiful black cat who is seldom called by her name (“We call her 'Cat' or 'little kitty', or whatever name we want to throw at her at the time.”), they have an 11-year-old Cairn Terrier named Ginger, who entertains the couple with her slightly mischievous antics and is a constant source of joy for them. “She was named after the movie star, Ginger Grant, on Gilligan's Island,” says Ed. “In fact, she is registered with the AKC as 'Ginger Grant Stamm'," he says. “I wasn't allowed to name her 'Mary Ann' (who I liked better than Ginger on the show), because Mary Ann is my wife's mom's name,” laughs Ed.

To complete the Stamm menagerie, there are two parakeets, 'Phryne' and 'Dot,' named after characters in an Australian Detective TV show, who live in Ed’s office, safely away from 'Cat'. “People who talk to me on the phone often hear them squawking in the background,” says Ed. “I leave their cage door open, and they often fly around my head, but they sure don't like me touching them,” he adds. In addition to being entertained by his pets, Ed enjoys his relaxing hobbies in his free time.

An avid stamp collector, Ed has been a member of the Henry Clay Philatelic Society for nearly 30 years, occasionally even giving lectures on various topics. He is also a voracious reader, with a penchant for history and biographies. “My favorite books involve people who I know about, but don't know much about,” says Ed. “I've recently read books on Mao, Lenin, Catherine the Great, and Napoleon, and all were eye-opening,” he adds. Currently, he’s reading a biography of the oft-forgotten President Polk.


A man of great principle, Ed donates regularly to the Southern Poverty Law Center, the ACLU, Amnesty International, Habitat for Humanity, and local food banks. “To me, it is vitally important that the poor among us are not forgotten, and that their rights as citizens and humans are given the full weight of the law,” Ed says. He is guided by the wisdom of historical figures whom he admires, such as this quote by Abraham Lincoln: “Those who deny justice to others deserve it not for themselves.” Copies of Lincoln’s Gettysburg Address and his Second Inaugural Speech hang on Ed’s office wall.

Ed is also an admirer of Martin Luther King Jr. and often refers to a favorite quote: “The arc of the moral universe is long, but it bends towards justice.” A fan of Jamaican singer-songwriter Bob Marley, Ed is also moved by some words of wisdom from him: "Until the philosophy which holds one race superior and another inferior is finally and permanently discredited and abandoned, everywhere is war," and "In the abundance of water, the fool is thirsty."

So, as a historian, what is Ed Stamm’s outlook for 2021 and the future?

“I am optimistic for 2021 and beyond. The key to a better year is, of course, getting COVID-19 taken care of. I believe that by late January, the Federal Government will improve the efficiency of vaccine distribution. America’s history is all about a strong work ethic, and that should result in a boom in late 2021, or early 2022. A similar boom happened in the 1920s, following the end of the ‘Spanish Flu’ and the end of WWI. So, yes, I am optimistic about the future.”