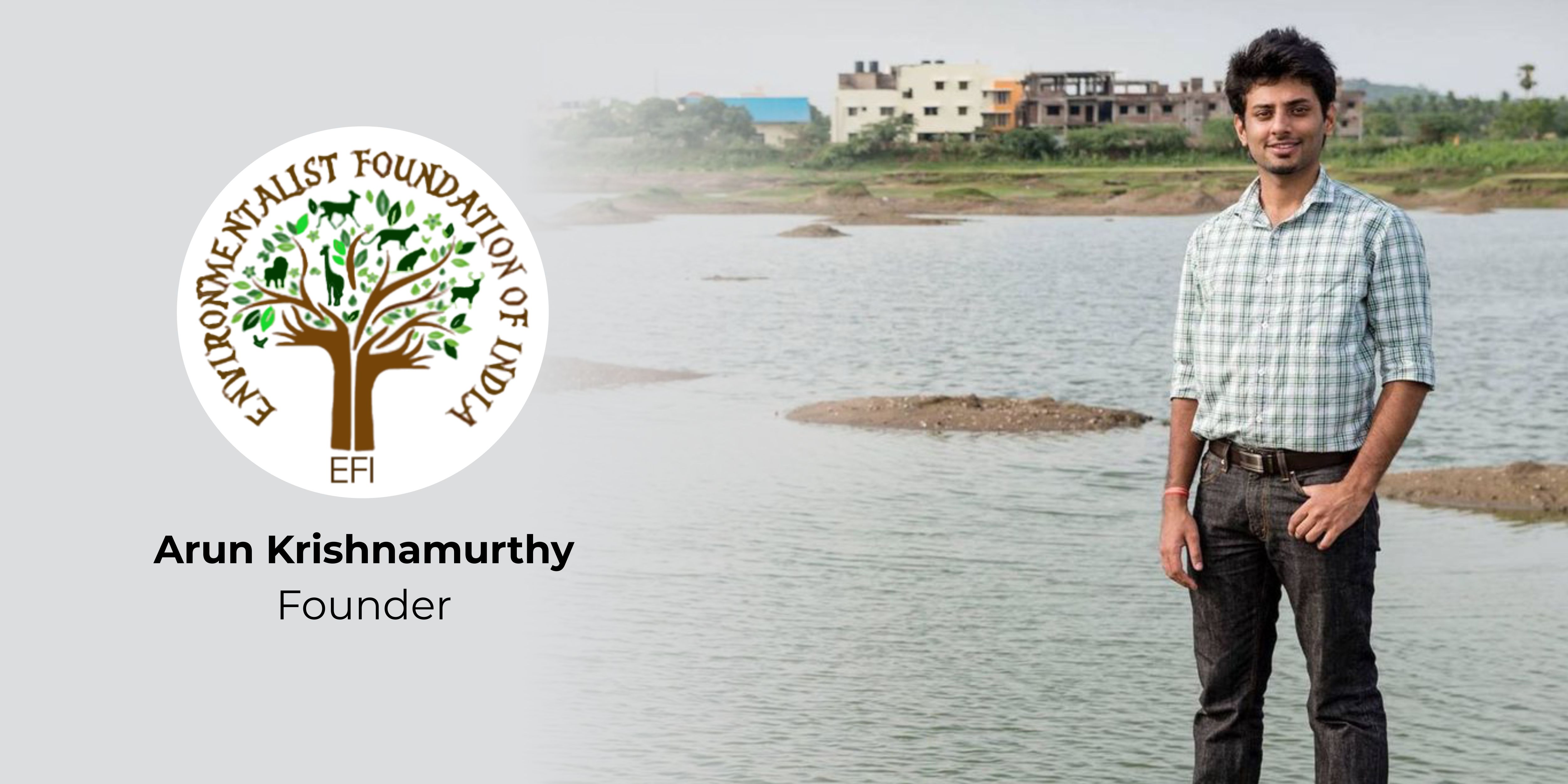 At Navitas Life Sciences (A TAKE Solutions Enterprise) we empower our people to give back to their community and society at large, ensuring that we function as a socially conscious organization working towards improved environment sustainability. We believe in making a difference in issues that help to build better solutions and we use our knowledge and expertise to address certain vital environmental concerns.

As a part of our Corporate Responsibility activities, we have been associated with The Environmentalist Foundation of India (EFI) founded by Mr. Arun Krishnamurthy for over 7 years. The EFI is a wildlife conservation and habitat restoration group and have restored over 129 water bodies across 14 states in the country

Arun Krishnamurthy quit his full-time job at Google to dedicate his time towards restoring lakes and enriching the habitat of animals that live near the lakes. In 2012, he received the prestigious Rolex Award for Enterprise acknowledging his efforts towards the scientific restoration of lakes in Chennai. Other previous awards received include the Jane Goodall Institute Global Youth Leadership in 2010, and the Google Alumni Impact in 2011. When he shifted his focus towards environment concerns, Arun secured a second master’s degree in water management from The Netherlands. 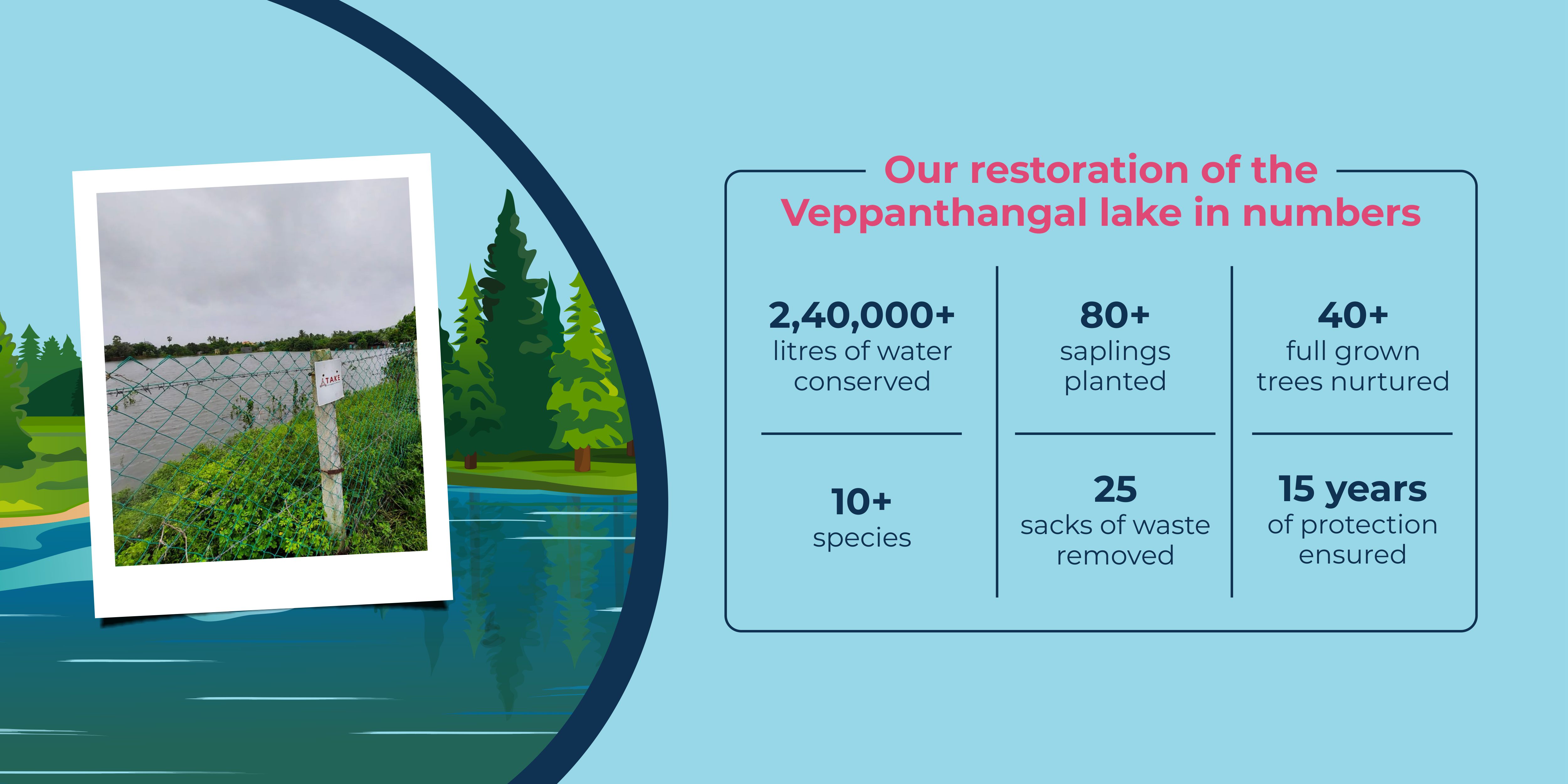 Here are excerpts of our one-on-one with Arun Krishnamurthy, as we discuss our combined effort towards the restoration of the Veppanthangal lake in Alapakkam.

NLS: Navitas Life Sciences Team: How did you start championing for the cause of environment sustainability? What lead to this?

Arun Krishnamurthy (AK): When I grew up in Mudichur, the area was a haven for birds, snakes, frogs and more. The lake in the area was a good source of water for the people living here, with over 40 to 50 feet of water. However, the sights and sounds that we had taken for granted when we were growing up were lost somewhere along the way, and the lake soon turned into a garbage dump.

There was a constant struggle with water, either severe scarcity or intense flooding. We witnessed a lake one day and a bus stand being constructed a few months later. There were lakes that were being dumped with residential garbage or construction debris. So, when we decided to bring about a change, like-minded people joined hands, and somehow, we were able to find the necessary strength in numbers and the financial support to carry forward our spiritual journey towards being environmentally conscious. We just had to remain committed to the cause.

NLS: What was the first step in your journey? Did you meet with consultants?

AK: We knew how the lake was earlier, we knew everything about the canal that led to the lake. We also knew what led to the change in state, with large piles of garbage and debris. Our mission was clearly etched, it was not ambiguous like saving the world, but a clearly focused goal of cleaning one sole lake. There was a lot of field-based learning that helped build our expertise, that we eventually have used to support many such initiatives. 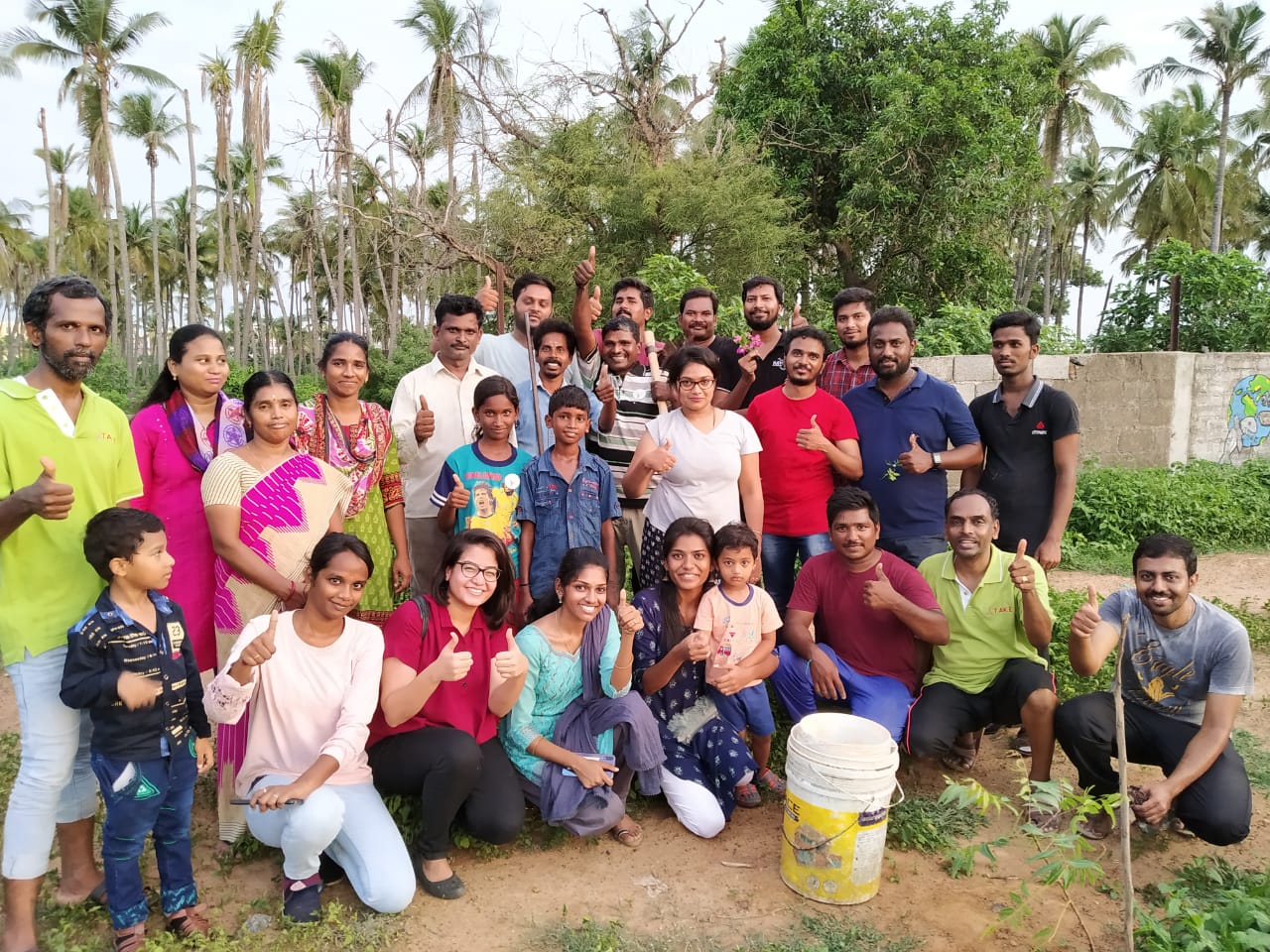 NLS: What would be your advice to like-minded people who wish to do their part?

AK: Read up about the problem that you wish to address. There is a lot of knowledge being shared via the internet. Learn to go in-depth into the problem and assess every aspect of it. This will arm you with relevant information and help you understand the best way forward. Collaborations do not necessarily have to be with experts, but with like-minded people with the same passion to give back to the environment.

We need to equip and empower ourselves first and then look for the necessary support, which can come from a lot of different sources. It is important to become field warriors and collect information from people living in the area, to determine the causes and the measures that would help.

Another aspect would be to identify global measures and adapt it to the local needs. There is no point in re-inventing the wheel. An apt example would be the device designed by another Rolex award winner and Bioacoustian engineer Michelle Andre to alert ocean vessels about the presence of whales off the coast of Canary Islands. This device helped avert whale collisions and prevent their mortality, but the device is also used to prevent elephants from colliding with trains running through the hilly forest regions in Southern India.

NLS: Are there any resources that people can use to find out more about conservation strategies?

AK: The first step is to identify the type of conservation that one wants to be associated with. Then seek out as much information as is possible, instead of relying solely on news stories. We need to be field warriors and learn from the source. There is a lot of patience that we need to cultivate. If we are persistent and work tirelessly, following the rule of the land and the principles of science, we will be successful working with anyone. 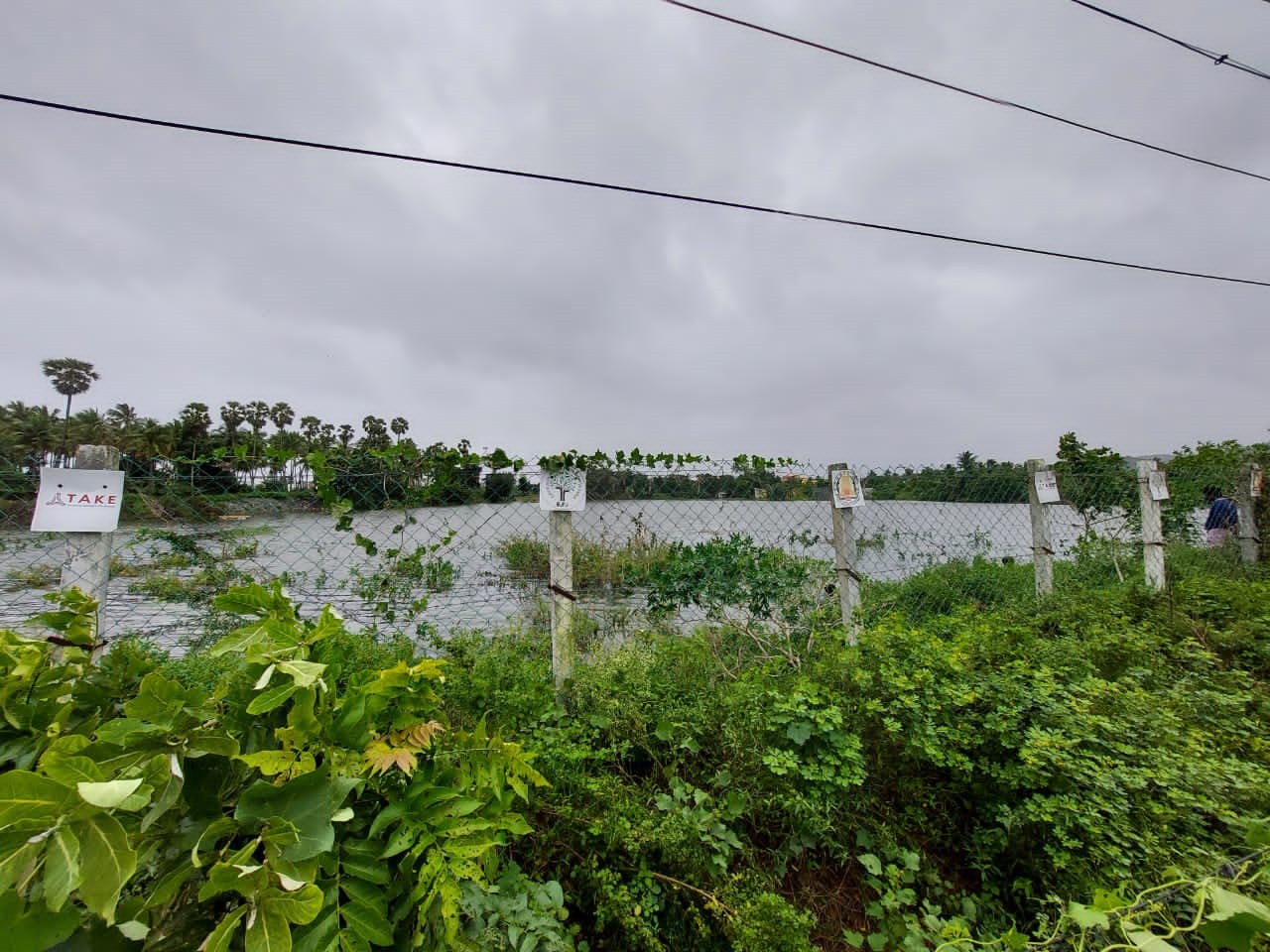 NLS: How did the Government help you in your work?

AK: The government helped us in a really big way. Most people tend to blame authorities or certain corporations for the mess that lies in most lakes. However, there are plenty of Government officials who are in their position of authority because they want to do more for the society and help build better communities. As far as democracy is concerned, we are the government, and we should use our people power and utilize the support provided by officials to further our environmental causes. We have had very positive interactions with the government.

NLS: How did you reach out to corporates to help you in your projects?

AK: When we started out, we had a vision, but we didn’t have the resources. So, the natural step forward was to reach out to corporates. We have always been selective about the corporates that we approached; we didn’t want to be associated with corporates who harmed the environment. We were also looking to work with corporates with businesses in the life sciences field. The corporates too carried out a background check to understand EFI better.

In that context, we are happy to be associated with TAKE Solutions and Navitas Life Sciences. We are grateful for the extent of support, both monetary and people support, that we have been provided with. There are plenty of like-minded people who work at TAKE and who have volunteered enthusiastically to support our causes. We work on lake restoration work as one team, as TAKE Solutions, as there is a common purpose and energy levels.

EFI has been successful because it is about working repeatedly with the same people and available resources, and about cultivating long lasting relationships. We have a positive working relationship with all our corporate partners, including TAKE Solutions.

There are numerous people from TAKE like Alex, Venkat, Gopi, Priyanka, Rahul, Suresh, Mohammed, and more who have worked with us, physically clearing out the garbage from the lake and helping it stay pristine. All of us enjoy working with TAKE and we look at our relationship as a lifetime commitment towards environment sustainability. 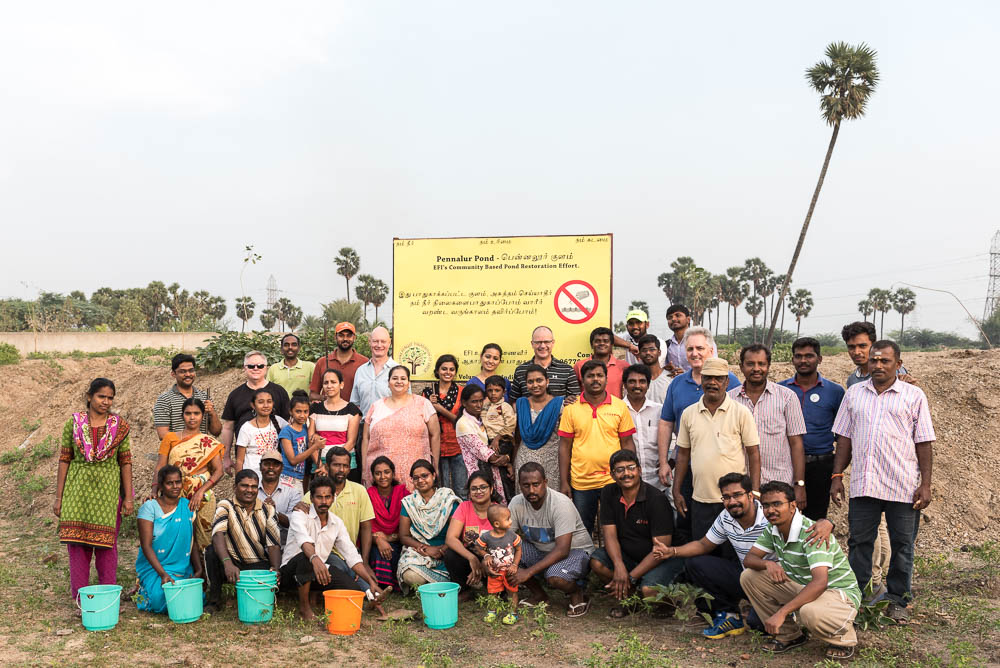 NLS: What is the reaction of people living around a lake when you start your restoration initiative? How do they respond to your efforts and what measures do you use to convince them?

AK: The response has been largely positive, as they all want their old lake back. The only minor hindrance is from people who may have usurped certain parts of it illegally. Such people pose a certain amount of hindrance. There are some others who may have been sold plots, without knowing that it was part of a lake earlier. Such people seek our help for alternate arrangements but are highly cooperative and willing to relocate.

Others in the area show overwhelming response, which may not be continuous, as their attention shifts between movies, cricket and big boss. However, when there is a lake clean up planned, they turn up in large numbers to help.

NLS: What about areas that were once a lake but are now urban concrete jungles with multiple flats and establishments built? Is there a solution for such areas, like an artificial lake?

AK: Such initiatives are due to urban arrogance, that can result in a lot of water inundation but with minimal solutions. The effort and resources needed for an artificial lake are extensive and there may be lack of space in such areas for the same. It is important to do a simple background check before buying a plot in any area, and to make informed choices.

NLS: During the recent (November 2020) rains, the restored Veppanthangal lake was filled with water and looked pristine. How did residents of Alapakkam respond to this?

AK: The residents are overjoyed with TAKE and EFI’s efforts towards restoration. The Veppanthangal lake in Alapakkam was being used illegally as a dumpyard when we started our initiatives. Apart from the huge piles of garbage that we cleaned out, we also cleared the banks and built a fence around the lake. We planted around 80 saplings out of which 43 have grown into tall trees.

The fence is covered with nectar beri beri and other shrubs, and together with the trees planted, we have helped improve the green cover in the area. The water inlets were blocked earlier but now have been cleaned and the recent rains have helped in filling the lake. The fence also prevents miscreants from entering the lake area.

The lake provided water to the residents even during the acute water shortage in 2019. So, our combined efforts have paid off in terms of environment sustainability and immense gratitude from residents. We have effectively protected the lake for another 15 years.